Time to deliver: governments must make good on their commitments and Stand Up for Education

In 2015, the world committed to a Sustainable Development Goal to achieve equitable, inclusive and free quality education and lifelong learning for all. This was the result of negotiation, research, and sustained citizen-led campaigning – all steeped in fifteen years of experience from the Education for All movement. It is now time for governments to prove they are working to realise the new SDG targets on education. It is time to deliver.

This week is the Global Campaign for Education’s Global Action Week, which provides an annual opportunity for citizens worldwide to act as a targeted, united force for change. This year, we are asking citizens and governments alike to Stand Up for Education, by ensuring accountability for Sustainable Development Goal 4 (SDG4), and enabling active citizen participation.

Challenges in delivering the goal

Despite education being a critical enabler of other human rights, it has long faced many hurdles. Recent geo-political shifts have challenged the process of global consensus-building, which is vital for the realisation of the SDGs. At the same time, we are bearing witness to continued and worsening conflict. And we are finding stronger barriers to civil society taking an active role in holding governments to account, with reports of aggressive action to limit civil society activity. Citizens must have a voice in any decision-making process, which impacts their lives, at all levels; this is critical – and intrinsic – to the realisation of the SDGs.

A longer-term challenge is the financing of education: a combination of reduced aid to education, and insufficient domestic resources in developing countries, has left 263 million children and youth out of school, and 758 million adults unable to read or write.

To deliver education on the ground, national attention must focus on the status of education, and political will must be leveraged. While GCE has expressed its profound disagreement with regressive measures – for example, the recently approved constitutional change in Brazil that freezes the education budget for twenty years – we are also focusing on upcoming opportunities for ensuring commitments are upheld. Here are several important areas of action:

National and provincial elections are to be held in many countries: in France, Coalition Éducation has asked election candidates to pledge to increase aid to education; in the US, in the wake of the elections, GCE-US has garnered the support of 90 Members of Congress to support global education; and in Ecuador, Contrato Social por la Educación has engaged candidates to step up to commitments made in the international arena.

GCE members are also mobilising to participate in the UN´s Voluntary National Reviews, which governments are completing to report on their progress in implementing the SDGs. GCE has produced a new briefing to support coalitions to work towards this objection.

Education civil society actors are organising themselves at the global level in the accountability processes for the SDGs: GCE, along with Education International, the International Council for Adult Education, and the European Students’ Union, represent an Organising Partner for the newly-formed Education and Academia Stakeholder Group, which has a formal role in the UN accountability structures and reports into the High-level Political Forum, the UN’s central platform for follow-up and review of the 2030 Agenda for Sustainable Development.

Global Action Week for Education offers a broad opportunity for change by inciting individuals and organisations to mobilise their networks, constituents, and friends to take part.

In Latin America, Foro Socioeducativo in the Dominican Republic is running numerous activities including the launch of the Guide on Education Policies for Educational Institutions – which aims to make explicit the alignment of the SDG4 targets with the national education plan, a workshop and seminar on the implementation of SDG4 and the progress and challenges in delivering the Education Agenda 2030, a paper on aligning SDG4 with the national education agenda, and several round tables, debates and reflections on different aspects of education.

In the Middle East, the Yemeni coalition, Yemen Coalition for Education for All, is collecting 100,000 signatures demanding that the government and international organisations fulfil their promises concerning the implementation of SDG4. The coalition has also coordinated with the Ministry of Education so that all schools on 29 April will hear morning speeches on SDG4, the government’s accountability, and the commitment of the Ministry to the pledges. In addition, a newsletter on accountability will be distributed in schools and universities.

In Africa, the Tanzania Education Network/Mtandao wa Elimu Tanzania (TEN/MET) held a meeting with reporters updating them on activities to be held in Nanyumbu (Mtwara Region) over the course of this week. This will include school/community awareness in Nanyumbu villages, calling upon all stakeholders to be responsible for improving the quality of education in the district. Mass demonstrations and public meetings have already taken place in Mtwara.

In Asia, the Philippines national coalition, E-Net, is advocating for the whole SDG4 agenda, and demanding that overlooked targets on early childhood, and on youth and adults be given due attention in implementation policies. At the same time, there are demands to increase education financing and ensure efficiency and effectiveness of the education budget. The coalition will hold a public display of the SDG4 targets, a forum on the role of different SDG4 stakeholders and a workshop on early childhood care and development. 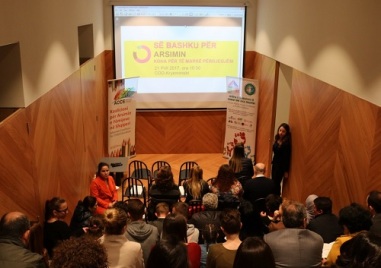 In Europe, the Albanian Coalition for Child Education launched Global Action Week in the Centre for Openness and Dialogue in Tirana, with representatives from the Office of the Prime Minister. The coalition is also holding open forums with young people in 8 regions, and running a public consultation with CSOs and Ministry of Education on the education budget.

From Colombia to Vietnam, Norway to Togo, many different activities are taking place. It is no exaggeration to say that millions of citizens worldwide are standing up for education this week and demanding that their governments deliver.

The education community, in particular the education civil society movement, campaigned hard to ensure that the SDG4 goal and targets and ED2030 Framework for Action are rights-based and encompass the full extent of the education agenda. While we strongly support all efforts made to improve the level and quality of learning, accountability cannot be reduced to measures of testing and teacher performance. Our struggle for accountability in the coming years spotlights the role and responsibility of governments as duty-bearers, who must protect, respect and fulfil the right to inclusive, quality, public and free education for all.